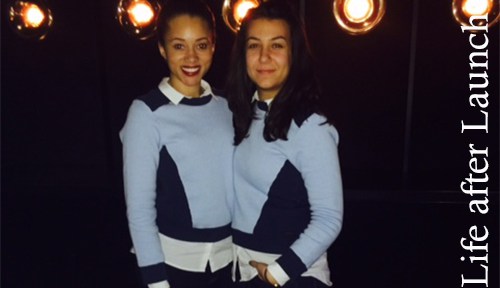 After working very closely with The Mondrian London team to deliver a fashion & function conscious uniform, Studio 104 were itching to see the uniform in action!

Tipped as the hottest hotel launch of 2014, The Mondrian London opened with a Bang! The 5 star hotel stands proud of place in the iconic Sea Containers building on South Bank, rubbing shoulders with the OXO tower next door. For a peak into the interiors designed by Tom Dixon, have a read of our exclusive sneak-peak blog!

Of course we were itching to see The Mondrian London’s Studio 104 uniform in action, so we spent the evening exploring the hotel and its stunning bars & restaurant Sea Containers!

As you enter the hotel you are greeted by the beautiful concierge team, here they are wearing their colour block sweaters and crisp white shirts. This simple look is striking in the lobby, and they catch your eye immediately.

Our first stop in the hotel was the Sea Containers restaurant, which faces the Thames providing a stunning view while eating.

After a quick introduction to the Sea Container’s menu, we headed across to the Dandelyan Bar to see the waitress’ Studio 104 uniform. This is a young and vibrant bar which is reflected by the uniform. The tonal greys compliment the bar’s interior, and the colourful cocktails on the menu

Our tour of the hotel had one more stop, the residents only bar Rumpus Room right at the top of the hotel. With stunning views of London, this bar has a special touch. For this bar the hotel wanted something striking for its uniform, so the Hostess wears a tailored tuxedo jumpsuit.

Here is Jane Porter, Studio 104’s founder and managing director with the Rumpus room Hostess, and waiter. The waiters wear a monochrome polka dot shirt to add a fun touch to the bar.

Studio 104 had a great time exploring London’s hottest hotel, and hearing the great things the Hotel’s Team had to say about their new uniform!